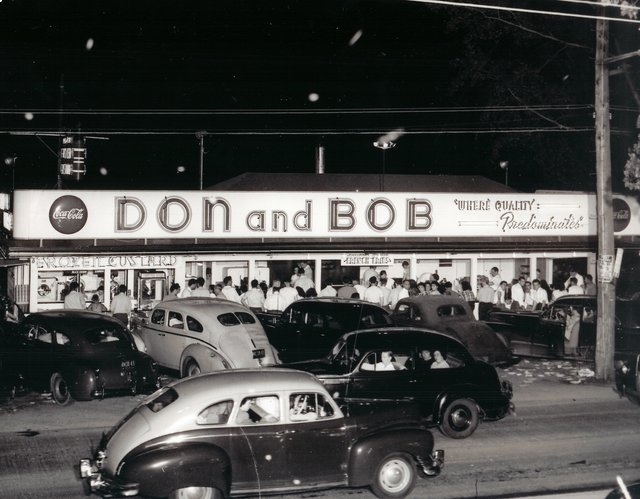 For over 75 years Don’s Original Restaurants have consistently provided the quality of service and product that is unparalleled in the fast food industry.

Though many things have changed since Don Barbato started over 75 years ago, one thing remains and will always remain the same…

The year was 1945 and World War II was almost over. A few months earlier, Donald J. Barbato received an honorable discharge after serving his country in the Pacific theatre. He returned to his hometown of Rochester, NY, in hopes of pursuing his dreams and starting a career. He was an eager and diligent man, and wanted to get back into the automobile business that he had been in prior to the War. However, the war effort had limited the auto industry, and his opportunities were few. His brother-in-law, Robert (Bob) Berl, had recently inherited the Zweigles Sausage Products business from his uncle, and he persuaded Don to help him out one day at a hot dog concession at a local dog show. Not many of us would have recognized this as a calling, but Don became quite imbued with this hot dog business that day. Bob also told him about a roadside hot dog stand at Sea Breeze that was available. Back then, the stands were seasonal concessions on Lake Ontario, and Don agreed to lease the stand for the 1945 summer season. With his brother-in-law’s support, Don named it DON & BOB’s. Rochester’s landmark eatery had been born.

Don’s standards were ahead of his time

Bob Berl soon returned to his Zweigles business, but Don and his wife, Ann, proceeded to set the pace at Sea Breeze. Don was an innovator, and his refreshment stand not only set the trend at Sea Breeze, but for an entire industry that would come to emulate many of his ideas. Don’s standards were ahead of his time. He was the first to remove the hot dogs from a sweaty cook’s arm and place them on paper plates. Messy self-serve condiments were put behind the serving counter and kept impeccably clean. He bleached the floors and polished the cooking equipment. The typical fare of hot dogs and ice cream was not enough for Don. He single-handedly developed the “ground round steak sandwich” which became his signature menu item. He traveled to Canada to learn about making french fries and was the first one to put them on his menu. His great service, quality food, and immaculate atmosphere made heads turn, and the smart patrons took notice of his dedication. The crowds were heading to Don & Bob’s for the preferred reputation.

The seasonal aspect of Sea Breeze left Don with some idle time. And then New York State built Route 47 (Now 1-590) which took away a large portion of his parking lot. Don and Ann, along with their two sons, Don Jr. and Bob (of course!) were now living in the beautiful suburb of Brighton. Don loved the area, and after purchasing a farm house on what was then a rural stretch of Monroe Avenue, made plans to build a new Don & Bob’s there, expanding his core business down at Sea Breeze. This would be a larger showcase restaurant that would be open year-round. Don had some opposition with neighboring properties and town codes, but he persevered, and in 1953, he opened what was to become the number one fast-food eating emporium in the Rochester area. The facility was heralded by the restaurant industry as ultra-modern. The equipment was state-of-the-art and the menu was extensive. Don was extremely loyal to his employees: Mel Lame, Cliff Lawson, Roger Varela and Nello Nucelli were diligent in their efforts to provide customers with three primary ingredients; quality food, expeditious service and an immaculate atmosphere. With Don’s brother, Joe, at the helm at Sea Breeze, the organization was firmly rooted.

In May, 1972, a young high school student and neighbor of Don and Ann Barbato, came to the counter at the Monroe Ave. location looking for a job. His name was Terry Klee, and Don initially told Ann to tell him that he was too young, and to come back after school was out, hoping he would go elsewhere for employment. Don was reluctant to hire neighbors and family friends, thinking that if things didn’t prove successful, he would have an additional problem. Terry was heartbroken. However, his mother told him to do just as Don instructed and return when school was out. “Show Mr. Barbato that you are sincere,” was her advice. And that is exactly what he did. Don was a bit surprised when Terry returned that June. But reluctantly, he hired him as a busboy in the busy dining room. A mentoring relationship had just begun that would later provide for a continued legacy of restaurant ownership and dedication.

Don severed his ties with the Monroe Ave. Don & Bob’s

In October, 1973, upon the urgence of Ann and his family to slow down and enjoy life, Don negotiated a transaction to sell the Monroe Avenue establishment. It was a bittersweet decision for Don, as the business was his life. However, the idea to relax a bit was appealing, and a small investment group was put together by a commercial realtor by the name of Max Springut. Don severed his ties with the Monroe Ave. Don & Bob’s, but retained his interest at Sea Breeze. The business at Monroe Ave. floundered over the next several years. It changed hands from different owner to different owner, losing all identity and affiliation with the management of Don Barbato. Because Don felt he no longer had control over the struggling reputation created by the new owners, he changed the name of his original restaurant at Sea Breeze to DON’S ORIGINAL.

Over the next several years, Don and Ann devoted more of their time to Don’s Original at Sea Breeze. Some of the loyal employees drifted to the Sea Breeze location, also, including Ann Cardile, Roger Varela and Terry Klee. Because of Don’s renewed presence at Sea Breeze, many patrons also returned to Don’s Original. In 1982, after a long and courageous battle with cancer, Don Barbato passed away, leaving Ann and his two sons to carry on his business at Sea Breeze.

For a brief period of time, there was another Don’s Original. Don’s son, Bob, together with Terry Klee operated Don’s Original at Charlotte, which they bought together in 1986. Two years later, Bob relinquished his interest in that location solely to Terry. Sometime later, Bob contacted Terry, who was then operating the Charlotte restaurant under the name of FRITZBURGER’S, and asked him if he was interested in purchasing the Sea Breeze Don’s Original from the Barbato family. Bob explained that he and his brother had other interests; Don Jr. operated a Carvel Ice Cream store in Pittsford and Bob was a professor at R.I.T. Terry was very interested and in May, 1991, became the new and sole owner of Don’s Original at Sea Breeze. Owning and operating Don’s Original seemed an almost predestined event in Terry’s life. His love of the business, and respect for Don Barbato’s ideals and philosophies made him the natural successor. He immediately began cleaning and refurbishing the Sea Breeze location to reemphasize the strict allegiance to the quality, cleanliness, and good service that Don’s Original always portrayed. Like Don, he knew that he could not do it alone. He called on long-time employees such as Roger Varela and Patricia Brinkman as well as new employees such as John Cipro and Tina Gift to carry on the tradition. These employees are proud of the restaurant they help operate and it shows. In 1995, under the ownership of Terry Klee, Don’s Original recognized it’s 50th Anniversary of being in business, truly a testimony that quality does predominate here.

Terry also had the desire to expand the Don’s Original business. In 1996, he purchased a piece of property on Monroe Avenue in Brighton, knowing well that the impact of the name Don’s Original was stronger there than any other place. Over the winter months, he remodeled the building to the standards he only knew would suffice for Don’s Original. And so the story of Don’s Original continues. Terry, his wife Sheila, and their four daughters are proud to be the owners of one of Rochester’s most cherished landmarks. That young man some 25 years ago, who took his mother’s advice, not only “showed Mr. Barbato that he was sincere”, but proved he was dedicated to Don’s Original and to guaranteeing it will always be “Where Quality Predominates.”

Terry opens a brand new Don’s Original location on Monroe Avenue, just down the street from the formerDon and Bob’s. Like Don, Terry expands the menu and creates a very successful year-round location.

Don’s Original Penfield opens with an even bigger store and more varied menu.

John and Karen Cipro take ownership of the Penfield Don’s

Beer and Wine is added to the Penfield

Beer and Wine is added to the Penfield menu, cheers!

The Pub opens at the Penfield location

The Pub opens at the Penfield location, with a full-service bar, table service, High-definition TV’s, expanded sports bar menu and a patio. Don’s Original Restaurant and Pub is a family-owned and operated, local favorite!

Don’s Original Penfield delivers! Check us out on Facebook or order online at donsrestaurantandpub.com! 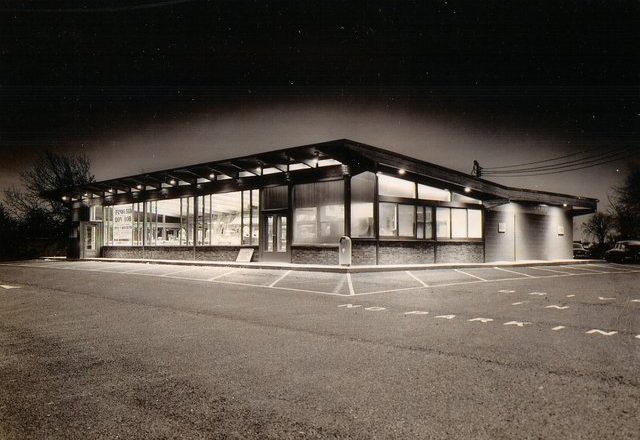 Don opens his second location on Monroe Ave. in Brighton. But this is no ordinary hot dog stand. This “food emporium” is over 6000 sq. feet with a huge menu that included everything from broasted chickens to broiled scallops. There was nothing of its kind in or around Rochester. 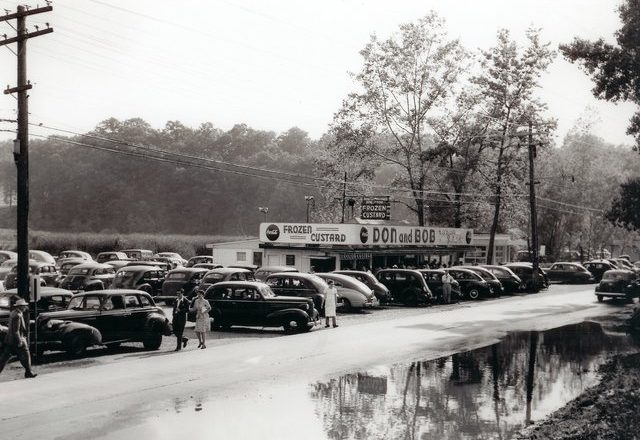 Slow down and enjoy life

Don sells the Monroe Ave. location. He did, however, keep the Seabreeze location. Concerns that the new owners may tarnish the excellent reputation he had built, Don decides to change the name at Seabreeze to Don’s Original. 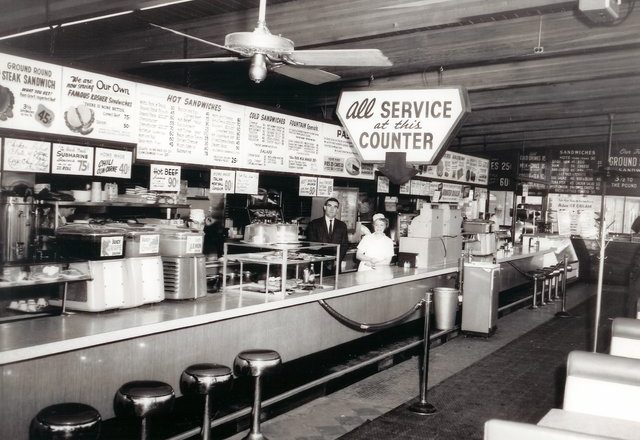